On June 9, 1922 the club was incorporated by Letters Patent under the Ontario Companies Act as Kingston Curlers Limited.

The Club began operating at 75 Clergy Street in 1923. On January 22, 1979 the Club was established as a non-profit shareholder organization under Supplementary Letters Patent issued by the Minister of Consumer and Commercial Relations.

On June 8, 1993 Her Majesty the Queen granted permission for the use of the title “Royal” by the Kingston Curling Club.

At the Club’s Annual General Meeting February, 1996, the shareholders voted to return their shares to the Club allowing it to reorganize. The Club, henceforth, became reincorporated as a non-shareholder corporation with newly issued Letters Patent and revised By-Law. Each fulltime member became an equal partner with full voting rights.

In September, 2005 the Club opened its current state-of-the-art facility on Days Road.

Thank you for this © Article by Helen Finley. This article appeared first in Vista, May, 2010. "Thank you!" to the following Donors:

One of the top women curlers in Kingston back in the 1950's and 1960's.  Carrie Cole claimed several club and flight championships at K.C.C. and shared in out-of-town bonspiel victories throughout Eastern Ontario.  In 1956, she was on the rink which won the Eastern Ontario ladies Championship.   Later on as a senior, Carrie skipped her K.C.C. rink to the Southern Ontario Senior Women's Tankard title in 1965.  Always a supporter of the game she loved, Carrie took a willing hand in helping yourng people learn the game. 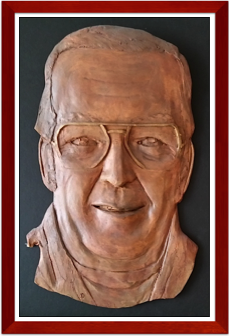 Intense competitor and unparalleled strategist, Jake left his mark on the sport with Ontario Championships in British Consols (Brier rep. 1960).  The Silver Tankard (1968), the Govenor Generals (1952), and the Seniors (1976-77).  Jake was President of K.C.C. in 1969 and during the Club's 150th anniversary in 1970.  He was deeply involved through his tireless efforts and continuing sponsorship.  The Edwards Shield, for competitive excellence exemplifies Jake's attitude to the game. 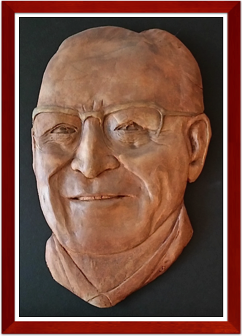 A lifelong curler and promoter of the sport, Karl served a term as Ontario Curling Association Presidenrt in 1967-68.  His time as President of K.C.C. in 1944 highlighted his many years of service on the Board of Management, extending into the late 70's.  Karl played on four Ontario Championships; Governor Generals in 1943 and 1947 as well as the Silver Tankard in 1952 and in 1953.  His gentlemanly conduct and enthusiasm made him the perfect ambassador of the roaring game. 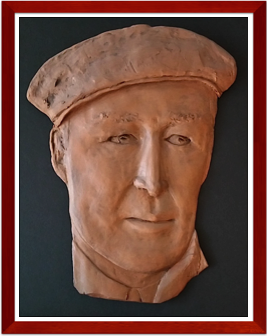 The name of Jack Sands was well known throughout Ontario curling clubs for his aggressive approach to the game during the 1950's. President of K.C.C. in 1948, Sands won the Ontario Silver Tankard in 1952 and then repeated the win in 1953.  Twice a runnerup in the Ontario championship British Consols, Sands carried the Kingston curling banner with success throughout the province in numerous competitions. 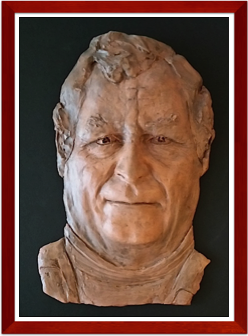 A valuable member of the Kingston Curling Club for many years, Lefty's contributions to the game within the club have been immense.  Besides serviing on the Board of Management for years and as club President in 1975, he has been an organizer of club activities throughout the curling seasons.  A respected performer on the ice, Lefty has played at Ontario championships and in 1985 skipped a rink to the Ontario senior mixed curling title, the first time a Kingston rink has won that championship. 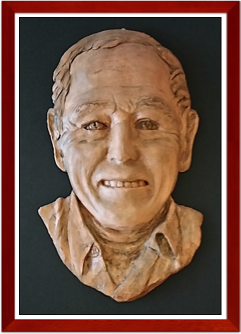 Ever since Clark Carnegie joined the Royal Kingston Curling Club in 1964, he has been the club's ultimate volunteer.  He made Saturday night mixed curling at the club in the 1960s and '70s, the place to be.  From there, he carried on his expertise as chairman of The Whig Standard's annual Friday night "steak barbeque" for more than two decades.  A life member of the Royal Kingston Curling Club, Clark has his name inscribed on the men's flight championship trophy four times with four different skips. 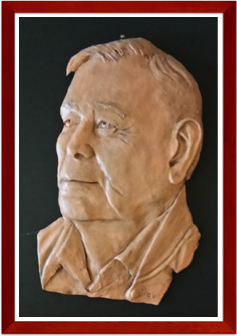 Bill Lewis was an active curler at the Kingston Curling Club from 1967 - 1985.  During that time he as the ice maker for three years. His major contribution to the club was that of instructor.  He helped numerous people to perfect their delivery and started them on the competitive trail.  he was the winner of various provincial competitions including three Ontario Seniors and two Silver Tankards.  Among his bonspiel wins were The Whig Standard, The Famous Fisherman's and the City of Ottawa. 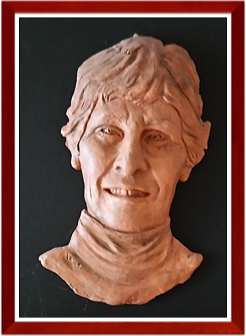 Marg has been a member of RKCC since 1962.  During this time she has made twelve appearances at the provincial level in OCA Tankard, Intermediates, Seniors and Masters.  In 1987 she was a member of a winning Senior Mixed team.  She is also a two time winner of the Lady Tweedsmuir LCA competition.  In club curling she won the initial Carrie Cole Championship, Senior Flight and numerous bonspiels.  Her club contributions have been as the convenor of the 1981 Intermediate Finals, the 1987 EOLCA Tournament of Hearts and the food section of the 1995 Tankard.

Linda Lott joined RKCC in 1979.  She has competed in many OCA competitions including the OLCA Women’s Tankard, Trophy, and Scotties. Linda has skipped several winning teams in Ladies Flight and Mixed. Her leadership skills are highlighted by her volunteer work as an organizer and coach with the high school curling league. Linda has served the Kingston Curling Community in the role of Chair of Greater Kingston Curling since 2012. Within the OCA Linda has been the Zone 4 representative since 1999 and served for three years as the Women’s Competition Chair on the OCA Board of Directors. Her service to the RKCC includes chairing the Social, Membership and Marketing committees and twice serving as Evening Ladies Chairperson. Linda has organized many club bonspiels including the Whig-Standard, Empire Life, Evening Ladies annual and two City Championship events. Linda served as President of the Board of Directors in 1997. 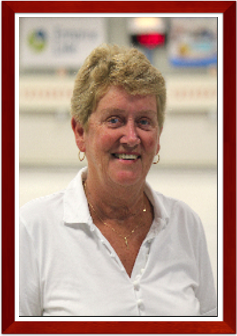 Betty was an RKCC member from 1979 until her passing in 2015.  In 2016 she was inducted into the Kingston and District Sports Hall of Fame. Her teams won the Ontario Master Women's twice and represented the province at the Canadian Master Women’s Championship. They made the provincial finals in the Senior Women’s; Women’s Tankard, Women’s Trophy; Senior Mixed Women’s Intermediates and were winners in numerous OCA zone and regional competitions. An ardent supporter of Club Curling her name can be found on many RKCC trophies. She was a mentor to many new curlers. Betty helped promote curling locally and provincially by volunteering at the Ontario Men’s Tankard, Ontario Mixed and Senior Mixed, and the Scotties. For many years she volunteered locally for the Alzheimer’s Society and Almost Home. She was a tireless volunteer chairing numerous committees and serving as a member of the Club's Board of Directors.

Phil has been a member of RKCC since 1974. His curling achievements include the Canadian Schoolboy Championship in 1973, the Ontario University Athletics championship in 1975 and 1976, and the Ontario Colts championship in 1975. He has competed in many OCA competitions, including the Tankard, Silver Tankard, Intermediates and Senior events. He was in the Ontario finals of the Governor General’s Trophy. He has won many local events and bonspiels including the Whig-Standard and the Fisherman’s. In 2001, his team finished runner-up in the Ontario Major League Championship. He has served on organizing committees for the Ontario Tankard, Canadian Juniors, BDO Grand Slam, the Scotties and the Kingston Major League. He played a large role in the development of junior curling. Phil was instrumental in the building of our new facility and has served on the Board of Directors as President in 1998-99. 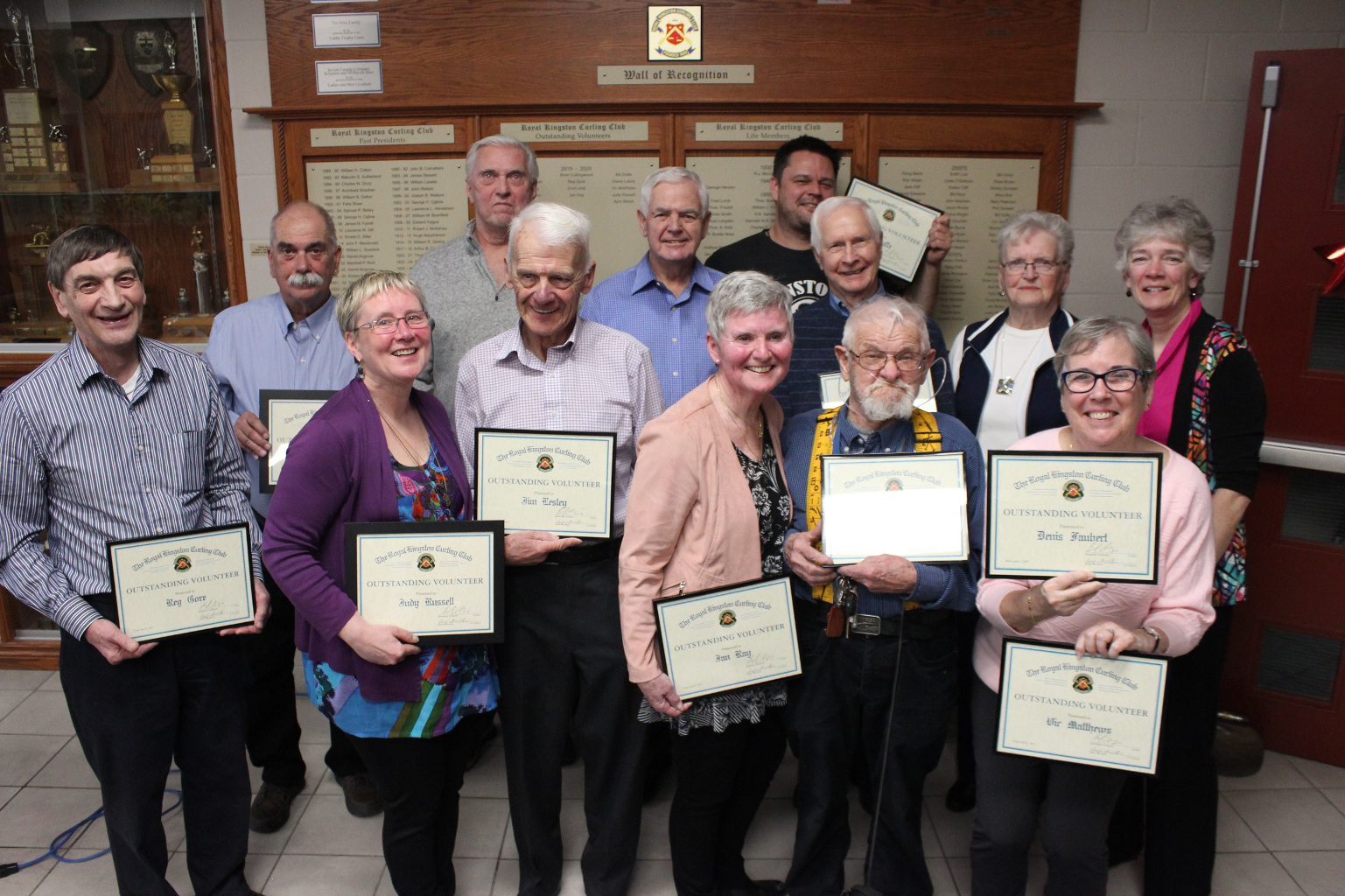 The Royal Kingston Curling Club recognized more than a dozen outstanding volunteers on Championship Night. The 14 inductees to the Wall of Recognition helped in particular in the process of building our new club on Days Road, establishing a strategic plan to guide the club forward, preparing and submitting grant applications, carpentry work, helping in the kitchen, coaching, convening bonspiels and serving on committees. From left are: Reg Gore, Wayne Smith, Judy Russell, Gene Miller (accepting the Emeritus Employee award for the late Rod Leeder), Jim Lesley, Steve Quinn, Jan Ray, Jamie Duffe, accepting on behalf of his father, the late Bill Duffe, Jim Barton, Emil Lindt, Diane Labrie, Joanne Miller, Member at Large and chair of the nominations committee, accepting on behalf of Denis Faubert and Vic Matthews, and April Welsh, who was herself inducted to the Wall of Recognition and who also accepted on behalf of her late husband, Brian Collingwood.

Send us an Email

There are no upcoming events.

Our Sponsors... with Thanks!